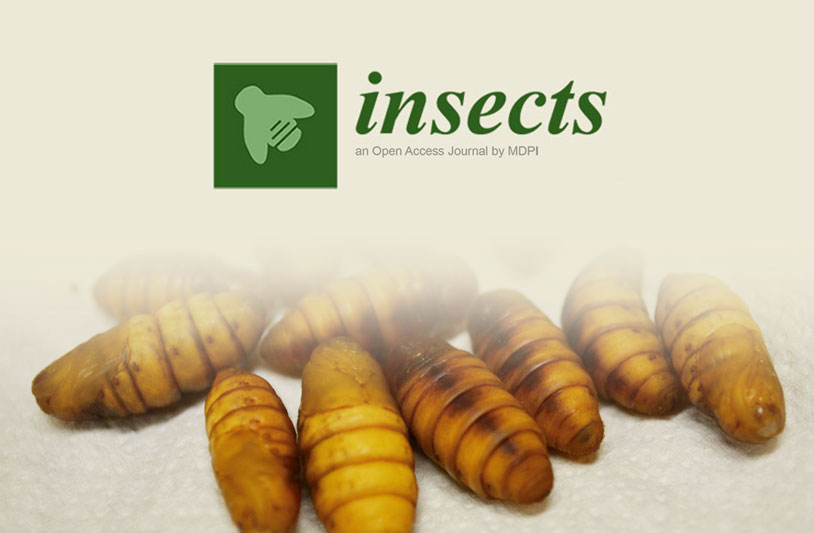 Studies on the nutritional composition of silkworms pupae

The analysis, carried out as part of the SILK PLUS Project, provides a review of the data currently available and suggestions for future studies.

“Insects” is an international journal of entomology published by MPD monthly; it is open-access and peer-reviewed.

This article belongs to “Silkworm and Silk: Traditional and Innovative Applications”, the special issue that has been already developed during 2021, and recently extended for other six months until the end of June 2022, with the aim of giving a comprehensive overview of the fields and applications for which the silkworm can be exploited.

The mulberry silkworm (Bombyx mori) is a domesticated insect traditionally reared to produce silk. Its pupae are historically eaten in Asian countries and are obtained as waste products from the silk reeling industry. Pupae are a promising novel food in Western countries as well as a source of proteins, lipids, and minerals. Several varied results are reported in the literature regarding the nutrient composition of silkworm pupa, and several factors must be considered when comparing the research. Some of the variables that could affect the pupal nutritional content include rearing techniques, diets, silkworm strains, killing, and drying techniques. This literature systematic review identifies the most important research areas and aids authorities and producers in the evaluation and development of silkworm pupae for novel uses.

As insects have started to enter the eating habits of Western countries, an increasing amount of literature regarding the mulberry silkworm (Bombyx mori) prospective application as food has been published. Despite this growing interest, there is currently no systematic review of silkworm nutritional composition available. In this paper, we performed a systematic review of the recent available literature on the nutrient composition of mulberry silkworm pupae. After screening the titles and abstracts of 14,008 studies retrieved from three scientific databases, data about nutrients was extracted from 29 selected papers, together with their related variables. This systematic review provides an overview of the variety of data reported in the literature and highlights that many elements contribute to hindering a sound comparison of the different nutritional values reported for silkworm pupae. The observed variability of the composition data reported could be due to differences in diet, strains, pretreatments, and origin of the silkworm analyzed. However, all these variables were not always available and should be reported in future studies to simplify the data comparison.

The literature on SP as food has increased recently, and the topic is expected to be investigated further, given the growing interest in insects as food. Our systematic review, which focuses on the nutrient composition of SP, highlights the wide range of data obtained. On the one hand, the variables involved in sample preparation and analysis are frequently well described in the studies; on the other hand, variables such as the mulberry cultivar used to feed the larvae, silkworm strain, and rearing environmental conditions are rarely reported. When SP was obtained from the silk reeling industry, pre-treatments, and storage conditions were also poorly described or unknown. Furthermore, studies reported data in various units of measurement or formats, making quick comparison difficult.
For all these reasons, new studies with more detailed and better described analytical methodologies, normalized data on a dry matter basis, and discussion about those values that significantly differ from previously reported literature are urgently needed. It is recommended that standard methods from other product sectors be established or adapted to analyze the nutritional values of edible insects for the food market (and feed as well) and that a reference benchmark for the most commonly used analytical procedures be established.
In terms of nutritional composition, SP is primarily distinguished by its protein content, which is the most commonly reported variable in papers. The wide range of values found in the literature for protein content and AA profile requires further study, as do the variables that influence those values. When it comes to the FA profile, it is worth noting that the available literature agrees on identifying five major FAs that account for more than 97.1% of the total SP lipid content. The balance of these five main FAs has been shown to be influenced by diet and pupal age, but the sum of these five FAs is very consistent regardless of upstream conditions.

Results of the Regional project SILK PLUS presented in Padua